This systematic review and meta-analysis of randomized controlled trials assessed the efficacy and safety of gabapentin and duloxetine for treating patients with painful diabetic peripheral neuropathy.
Migraine and Headache 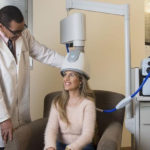