Despite the availability of therapies, many headache syndromes remain refractory to symptomatic treatment, achieving incomplete resolution of pain, and patients with chronic headaches often pursue nonpharmacologic treatments in hopes of achieving a greater duration of pain relief. Evolving therapies for headache, therefore, have recently focused on intervening in the neuronal mechanism of many forms of headache, such as those that seem to involve the sphenopalatine ganglion (SPG).

The Role of the SPG in Headache

The SPG is a large cluster of sympathetic, parasympathetic, and sensory neurons that lies outside the cranium in an inverted form within a small pyramidal space immediately posterior to the nasal turbinate.1,2 Nerve fibers run through the SPG to the ophthalmic and maxillary regions of the trigeminal nerve, affecting numerous glands of the nose, mouth, and throat.2

The SPG has been implicated in many headache disorders, including cluster headache, migraine, facial pain, and trigeminal neuralgia.1,2 As a result, a range of interventions targeting the SPG has been explored to manage these conditions. In chronic headache, SPG-blocking modalities such as intra- and trans-nasal lidocaine drops, nerve blocks, surgical resection, cryosurgery, and radiosurgery have all demonstrated safety and efficacy for treatment of cluster headache, migraine, and other neuralgias.3 Despite this, the optimal method has not become clear.3

At the same time, interventions that stimulate the SPG have also been investigated, and multiple studies have demonstrated long-term efficacy, particularly for cluster headache, suggesting potentially broader applications in migraine and trigemino-autonomic headaches.4 In a review of neuromodulatory interventions for pain involving the SPG, Tepper and Caparso2 reported that two-thirds of patients with frequent headache from several trials who were treated with SPG neuromodulation achieved a 50% or greater reduction in attack frequency.

The radiofrequency ablation (RFA) modality represents an effort to extend the benefits of SPG blockade, particularly for patients with intractable cluster headache. Studies of RFA in headache have been limited, however, and have produced mixed results. The Tepper article reported findings indicating that because of its flexibility and reversibility, neuromodulation is a superior modality for pain reduction compared with ablation, which, they wrote, is “a permanent or very long lasting destructive lesion and is not rescindable once executed.”2 This was largely contradicted by a 2019 review by Abd-Elsayed and collegues,5 which concluded from several studies of RFA that it was both safe and effective for the treatment of resistant headaches associated with pericranial neuralgias.

The strongest evidence appears to be in the treatment of chronic cluster headache. Data from a 2009 review by Narouze et al6 supported the use of percutaneous RFA of the SPG for treatment for patients with intractable chronic cluster headaches. The authors recommended that development of more precise needle placement via real-time fluoroscopy and electrical stimulation for the procedure was likely to reduce the incidence of associated adverse events.

Since that time, investigation into RFA has continued to focus on improvements in the technology. Loomba et al7 conducted a case study of percutaneous RFA of the SPG in a single case of chronic cluster headache, using cone beam computed tomography for image guidance. The results showed the superiority of cone beam computed tomography as an alternative to biplane fluoroscopy in this modality. In a recently published technical review of RFA, performed using a fluoroscopic approach to guiding the needle to the pterygopalatine fossa for placement, Tolba et al1 also found it was a valuable therapy for cluster headache.

Because of the proximity of facial nerves, a high degree of technical proficiency is necessary to perform the RFA technique, and modifications to the technology may improve safety. Tolba and colleagues observed that the long-term adverse events associated with RFA, such as hypoesthesia or dysesthesia of the palate or pharynx, could be improved with delivery of pulsed radiofrequency rather than standard thermal ablation.1

In a systematic review of pulsed RFA for the treatment of cervicogenic headache, in which pain is referred up from the upper cervical spine to the head, Nagar et al8 found no good evidence from randomized control trials that supported its use. The authors attributed the low quality of evidence favoring RFA to flaws in the design of randomized controlled trials, inconsistencies between them, and gaps in the chain of evidence.8 As cervicogenic headache does not appear to related to the SPG, this may also explain the lack of benefit.

Abd-Elsayad and colleagues reported that RFA “does well” when compared with other modalities such as therapeutic nerve blocks, onabotulinum toxin A, and Gamma knife surgery.5 “Our study found RFA of pericranial nerves resulted in patient-reported pain improvement of 62.6% ± 33.7. In addition to pain, patients reported improvement in symptoms such as chronic daily headaches, dizziness, and insomnia.”

Other adverse effects to treatment, such as swelling at the procedure site and/or of the eyelids, and a case of infection reported in the Abd-Elsayed study were quickly resolved with treatment, and 2 of 168 patients experienced a worsening of headache postprocedure. 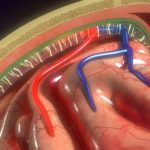 Revisiting the Role of Histamines in Migraine