Researchers estimate that the annual costs associated with mild traumatic brain injury (mTBI) in the United States are close to $17 billion.1 Although 80% to 90% of individuals with mTBI recover, approximately 10% to 20% develop a chronic condition known as postconcussion syndrome (PCS).2 PCS’s most common symptoms include post-traumatic headache (PTH) and photophobia, which often prevent affected individuals from returning to school or work.

Clinicians in a variety of settings are likely to encounter patients exhibiting symptoms of mTBI. However, the pathophysiology of mTBI symptoms is not well defined, and these limitations may affect the quality of care clinicians can provide. A narrative review published in The Canadian Journal of Neurological Sciences Inc. examines possible pathophysiologies of PTH and photophobia.

While some experts believe PCS symptoms may result from structural damage to the brain or disruption of the messaging system within the nerves, the mechanism remains unclear. A common pathway has yet to be identified for PTH and photophobia. However, there is a link between these symptoms, as shown by overlapping pathophysiological data. A variety of possible pathophysiologies have been identified, along with several key risk factors.2

In a clinical setting, physicians often seek to identify the PTH headache phenotype and treat symptoms with the same medications used for primary headache disorders. The headache phenotype can vary, but approximately 33% to 50% of individuals with PTH exhibit migraine symptoms, while 40% to 97% exhibit tension-type symptoms.2

After mTBI, most individuals find that their headaches resolve within 6 months. However, up to 1.8 million people in the United States develop acute PTH annually, while 400,000 develop persistent PTH each year.3 The distinction between acute and persistent PTH is based solely on time, with headaches appearing within 3 months of the original trauma classified as acute PTH. Interestingly, more individuals with mTBI appear to suffer from PTH than those with moderate-to-severe TBI.2

In their review, the researchers sought to analyze currently available data on PTH and accompanying photophobia. CINAHL, EMBASE, and PubMed databases were reviewed for papers published between 2000 and 2018 in both English and French. All types of articles were considered, including review articles, RCT, case reports, and abstracts. Researchers covered PTH in both adult and pediatric populations. However, the team excluded papers specifically addressing moderate to severe TBI. Of 3966 records, a total of 51 were analyzed and included in a narrative review.2

The link between PTH and photophobia was of particular interest to the researchers. Photophobia is defined as an abnormal tolerance to light or visual discomfort in low light levels. However, little is currently known about the pathophysiology of photophobia. Although photophobia is commonly associated with migraine-type headaches, some study investigators have revealed that individuals who suffer from TTH report more light sensitivity when compared with controls. Further, light is sometimes a trigger for a headache attack, and photophobia can occur even when no headache is present.2 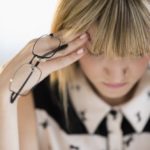