Brain CT, CT angiography, and PCT were performed approximately 60-90 minutes following the onset of MA symptoms. Acute lesions or vascular disease were not found in either brain CT or CT angiography groups. Qualitative and quantitative patterns that were compatible with normal perfusion were demonstrated in all 6 patients, and PCT also demonstrated a symmetric perfusion that had higher cerebral blood volume and cerebral blood flow in gray matter vs white matter. Results of the brain-CT scan, specifically for cerebrovascular disease, were normal in all patients.

Based on these results, the study researchers concluded that normal perfusion neuroimaging may suggest MA and that PCT may be a useful tool in the diagnostic algorithm when clinicians are working up causes of acute neurological deficits.

This study was comprised of only 6 patients, which limits the power of the findings and prevents generalizability across a wider MA patient population. In addition, the findings of this imaging study were obtained retrospectively, further limiting the results.

The use of “PCT may add confidence in detecting a potentially treatable stroke, but, when negative, it may lead the clinicians to consider the occurrence of a stroke mimics” while avoiding the use of unnecessary reperfusion therapies. 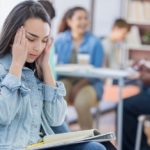 Adolescents With Chronic Headache May Benefit From Targeted Group Education