Study investigators concluded that “[h]igh plasma NFL correlated with poor cognition both in AD and PD patients, but not with motor symptoms in PD patients. Plasma NFL may represent a biomarker of cognitive decline in AD and PD, with greater specificity for AD.” 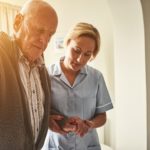