Impairments in inspiratory and expiratory function frequently occur in patients with multiple sclerosis (MS); even those without overt signs and symptoms of respiratory dysfunction. The causes of respiratory muscle weakness in MS can include neurologic impairment, physical inactivity, steroid-induced myopathy, or demyelination of the respiratory motor pathways.1

Respiratory muscle weakness can lead to fatigue, reductions in lung volume, decreased exercise performance, deleterious effects on quality of life, and impaired ability to cough.1,2 Diminished coughing performance can in turn cause potentially fatal outcomes such as aspiration pneumonia or acute ventilatory failure.3 These significant consequences of respiratory muscle weakness have led researchers to explore the use of respiratory muscle training (RMT) as a rehabilitative therapy in patients with MS. While various modalities such as deep breathing exercises have been studied in clinical trials, the most common form of RMT involves the use of portable resistive threshold devices that increase airflow resistance during inspiration or expiration.4

In an email interview with Neurology Advisor, Matthew N. Bartels, MD, MPH, chairman of the Department of Rehabilitation Medicine at Montefiore Health System in New York City, stated that the clinical benefits of RMT are uncertain. “Aside from directly measured inspiratory and expiratory muscle strength measured via peak inspiratory and expiratory pressures, studies to date have not shown a clear survival or other medical benefit from RMT in MS, as well as in other populations. In order to definitively study RMT in MS, what would be needed is a good placebo-controlled trial – such as a comparison of RMT and a sham RMT – with a longer follow-up looking at respiratory complications over a year or two while assessing objective measures of lung function and sustainability of benefits in a population of patients with MS. It may unfortunately be difficult to do a trial like this, as the intervention may be moderately costly and hard to fund, but it would be technically reasonably simple.”

A recent Cochrane review and meta-analysis of six clinical trials of RMT in patients with MS found low-quality evidence that inspiratory muscle training with a resistive threshold device is moderately effective for improving predicted inspiratory muscle strength. No evidence of benefit was found for resistive expiratory muscle training.3 However, Andrew Ray, PT, PhD, of the Department of Rehabilitation Science at the University of Buffalo, State University of New York, told Neurology Advisor that further evidence is needed before the benefits associated with expiratory muscle training should be discounted. “Other nonrandomized studies in MS and other diseases have shown a benefit associated with expiratory training on cough and peak flows,” he noted. “This means additional well-powered controlled studies need to be performed in MS. The review only included a few studies that included expiratory training and a few studies including inspiratory training, thus demonstrating the lack of well-done studies in this area. Currently, the potential benefits far outweigh the adverse events. Patients cannot get worse from performing the training. They can only get better.”

Dr Bartels concurred that there are no apparent downsides or complications from RMT. “If a patient has lung compromise or dysphagia and has access and can do RMT, it is safe, but it may not bring the benefits hoped for. In patients with clear muscle weakness, it may have a role in helping to preserve strength. A caveat is that patients with MS should avoid overfatigue in weakened muscles, so that the RMT should be done with supervision.”

Currently, RMT is rarely offered to patients with MS outside the context of clinical research. “I do not believe it is prescribed very often and to my knowledge very few seek it out,” said Dr Ray. “Barriers include [lack of] communication between rehab providers and neurologists to isolate patients who would benefit from RMT, plus [lack of] qualified personnel to implement such a program. Very limited rehab staff are familiar with RMT.”

Dr Bartels told Neurology Advisor that there are interventions other than RMT that can improve the respiratory health of patients with MS. “Key items to think about in patients with MS who may have pulmonary compromise is maintaining pulmonary hygiene,” he stated. “This means that patients with MS should have regular assessments of their ability to swallow safely and be treated with speech therapy for dysphagia when identified. Additionally, assessment of effectiveness of cough and using other pulmonary rehabilitation assistance such as cough aids, assisted coughing, and other interventions may be indicated. Screening with pulmonary function testing and assessment cough is part of being mindful of the potential for pulmonary compromise in patients with MS. This is especially true since breathing symptoms often will not present until more than half of lung function has been lost. Since there is a great deal of lung reserve in most individuals, they may not have any breathing symptoms, even while they have a weakened cough and impaired lung volumes and lung pressures. In the case of respiratory compromise, earlier intervention likely will result in better outcomes with regard to pulmonary function and prevention of lung infections in patients with MS.” 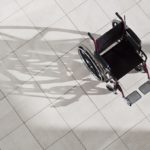