WASHINGTON — As many as 50% of patients with Parkinson’s disease experience psychosis at some point in their illness, but only 10% to 20% of those who do report it to their doctor.

A new virtual reality simulation, demonstrated during the American Academy of Neurology 2015 meeting, offered physicians who treat patients with the condition a glimpse into these debilitating symptoms in an effort to raise awareness.

“It’s very important that physicians begin to understand what it’s like to have a psychotic experience like a visual hallucination, so they know what to ask and how to explore the topic with patients,” Jeffrey L. Cummings, MD, ScD, Director of the Lou Ruvo Center for Brain Health at the Cleveland Clinic in Las Vegas, Nevada, said in an interview.

The virtual reality tour uses a popular gaming system, the Oculus Rift headset, to enable physicians to experience a simulation of Parkinson’s psychosis.

“Despite patients being different, there is a surprising amount of overlap in the kinds of hallucinations and delusions reported. The virtual experience brings some of those experiences to life, which means they are more recognizable as symptoms to physicians,” Cummings said.

During the simulation, unpredictable visuals effects occur — including fleeting shadows appearing in the user’s peripheral vision, a pair of shoes morphing into squeaking rats, and snakes slithering in through an open bedroom window — that replicate some of the more commonly reported hallucinations.

“The psychosis of Parkinson’s disease has a detrimental effect on quality of life, both for the patient with PD and for the caregiver,” Cummings said. “These are terrifying experiences and of course the caregiver is often mystified.”

Parkinson’s psychosis is often associated with increased caregiver stress and burden, greater nursing home placement, and increased morbidity and mortality for patients. Cummings hopes the virtual reality simulation can be used as an educational tool to help normalize the experience for patients and their families while better treatments are being developed to better manage the condition.

Currently, there are no FDA-approved medications with indications to treat Parkinson’s psychosis, but an investigational treatment, pimavanserin (Nuplazid, Acadia), has demonstrated promising efficacy and tolerability in clinical trials.

The medication, which has a breakthrough therapy designation, is currently under review with the FDA. 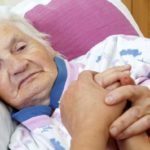