Certain components of metabolic syndrome may be more common in patients with Parkinson disease (PD) who are carriers of an LRRK2 mutation compared with other PD etiologies, according to research results intended to be presented at the annual meeting of the American Academy of Neurology (AAN 2020).

Metabolic syndrome may be a risk factor for PD, but whether any of the 5 metabolic syndrome components are linked to PD clinical phenotype, genetic status, or disease development remains poorly understood. To examine this, researchers conducted a cross-sectional observational study of individuals with idiopathic PD (n=104), genetic PD (leucine-rich repeat kinase 2 [LRRK2]-associated: n=40; glucocerebrosidase [GBA]-associated: n=70), or nonmanifesting GBA or LRRK2 carriers (n=55 and n=97, respectively), as well as a control group of 196 healthy individuals.

The investigators collected data on demographic and clinical variables, constructed Movement Disorder Society prodromal probability scores, and examined components of metabolic syndrome according to genetic status in nonmanifesting carriers of GBA or LRRK2 mutations vs patients with PD.

Moreover, rates of hypertriglyceridemia (P <.005) and prediabetes (P =.023) were higher among nonmanifesting LRRK2 carriers with probability scores for prodromal PD >50% compared with those who had lower probability scores.

Based on these results, the researchers suggested that elevated triglyceride levels and prediabetes may be modifiable risk factors in carriers of LRRK2 mutation. 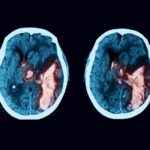 Outcomes of Delayed Presentation in Patients With Intracerebral Hemorrhage