Researchers sought to validate the use of qEEG using data from retroactively identified participants from a larger, longitudinal, natural history study of SWS.

Investigators identified infants that underwent an MRI with contrast, were followed clinically through 1 year of age, and had an EEG performed prior to 1 year (median age 3 months). Those included were then classified as SWS- (normal brain MRI after 1 year of age) or SWS+ (appearance of contrast-enhancing leptomeningeal lesion after 1 year of age).

Of the 48 infants meeting inclusion criteria, 32 were diagnosed with SWS; the remaining 16 infants were found to have no significant findings on MRI and did not experience symptom emergence after 1 year of age. Sensitivity and specificity of qEEG for predicting SWS diagnosis was 53% and 81%, respectively. Pretest probability for SWS in patients with facial port-wine birthmark was approximately 25%. Investigators found abnormal qEEG increased the probability of SWS diagnosis from 25% to 48%, whereas a normal qEEG increased the probability of a negative MRI after age 1 from 75% to 84%.

While the current reference standard for diagnosis of SWS is MRI at a later stage, the researchers found qEEG contains relevant information for SWS development and “may serve as a prognostic biomarker for the development of SWS in infants with [facial port-wine birthmarks].” They concluded that “qEG may provide adequate reassurance that an asymptomatic infant with a normal qEEG will not develop SWS. This may allow families and clinicians to feel comfortable deferring an MRI until after at least 1 year of age.” 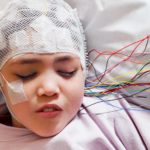