NASHVILLE — In 2014, the Eighth Joint National Committee endorsed changing target systolic blood pressure (BP) levels from 140 mm Hg to 150 mm Hg in individuals aged 60 years or older who do not have diabetes or chronic kidney disease. Now, a new study presented at the International Stroke Conference 2015 raises concern that increasing this threshold could increase the risk for stroke, particularly in minority patients.

“While the 2014 guideline relied on evidence from clinical trials, it did not consider data from various other types of studies that support a systolic BP goal for these individuals of less than 140 [mm Hg],” Chuanhui Dong, PhD, study researcher at the University of Miami Miller School of Medicine, told Neurology Advisor. “Our major concern with this change is for stroke prevention because hypertension is a well-established common modifiable risk factor for stroke and a major contributor for race-ethnic disparity in stroke. Data from population-based studies supporting the change is particularly limited in Hispanics and non-Hispanic blacks.”

This led Dong and colleagues to conduct the Northern Manhattan Study (NOMAS), which enrolled 1,706 patients aged ≥60 years who were free of stroke, diabetes, and chronic kidney disease at baseline. They followed patients annually to determine incident strokes, which was adjudicated by two vascular neurologists.

“As Hispanics and blacks are known to suffer strokes more frequently than whites, raising the threshold for hypertension treatment could have a worse effect on racial-ethnic disparities in stroke risk reduction,” Dong said.

He added that hypertension is the most established and modifiable risk factor for stroke. “Reduction in systolic BP below 140 [mm Hg] is important in primary stroke prevention, even among those over 60 [years of age] without diabetes or chronic kidney disease.” 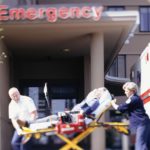