Globally, among health care workers, there has been a high prevalence of depression, anxiety, and PTSD during the COVID-19 pandemic.
Next post in Practice Management 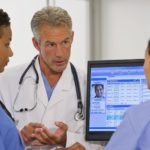 Provider Confusion Often the Cause of Patient Access Rights Violations