HealthDay News — Symptoms of burnout and career choice regret are prevalent among U.S. resident physicians, according to a study published in the Sept. 18 issue of the Journal of the American Medical Association.

Liselotte N. Dyrbye, M.D., from the Mayo Clinic in Rochester, Minn., and colleagues examined factors associated with symptoms of burnout and career choice regret in U.S. resident physicians. First-year medical students completed a baseline questionnaire (4,732 students) and were invited to respond to two questionnaires during year four of medical school and during the second year of residency.

“Among U.S. resident physicians, symptoms of burnout and career choice regret were prevalent, but varied substantially by clinical specialty,” the authors write. “Further research is needed to better understand these differences and to address these issues.” 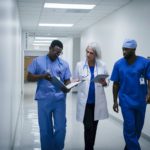 Education Can Up Emotional Intelligence in Residents