HealthDay News — In women, midlife obesity is associated with increased risk for dementia later in life, while no clear associations are apparent for low body mass index (BMI), low caloric intake, or inactivity at baseline, according to a study published in Neurology.

Sarah Floud, PhD, from the University of Edinburgh in the United Kingdom, and colleagues recruited 1,136,846 U.K. women (mean age, 56 years) in 1996 to 2001 and asked them about height, weight, caloric intake, and inactivity. The women were followed until 2017 by electronic linkage to National Health Service records.

Fifteen years after the baseline survey, 89 percent of participants remained alive with no detected dementia, 18,695 of whom had dementia detected later (mean age, 77 years). The researchers observed an association between dementia detection during years 15+ and baseline obesity (BMI, 30+ versus 20 to 24 kg/m² rate ratio, 1.21); no clear associations were seen with low BMI, low caloric intake, or inactivity at baseline. These three factors correlated with increased dementia rates during the first decade; over time, these correlations weakened considerably, approaching null after 15 years.

“In this population, midlife obesity is the only factor examined that is likely to be causally related to dementia, perhaps chiefly through its effects on vascular disease,” the authors write. 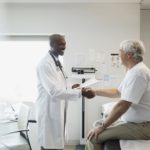