HealthDay News — Plasma concentrations of amyloid-beta at midlife are associated with the risk for mild cognitive impairment (MCI) and dementia later in life, according to a study published online Aug. 4 in Neurology.

Kevin J. Sullivan, Ph.D., M.P.H., from the University of Mississippi Medical Center in Jackson, and colleagues examined the association between midlife plasma Aß and the risk for MCI and dementia. In a subsample of the Atherosclerosis Risk in Communities cohort study, plasma Aß42 and Aß40 were measured retrospectively for 2,284 participants. 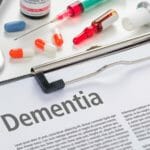