A study, published in Immunity, found that type I interferon (IFN-I) signaling was a critical module within the neuroinflammatory network of Alzheimer disease (AD).

Investigators at Baylor College of Medicine used a murine model (5XFAD) to evaluate brain-wide cellular reactions to IFN-I and its potential role in cognition and neuropathy.

5XFAD mice were previously reported to have nucleic acid-containing brain plaques which when complexed to amyloid, stimulated an IFN-I response.

In β-amyloidosis, a disease-associated microglia (DAM) phenotype occurs among a subset of microglia. DAM was marked by a high C-type lectin domain containing 7A (Clec7a) expression and responsiveness to IFN-I signaling. This signaling was observed to reach beyond microglia, in accumulating parenchymal amyloidosis. These patterns were age-dependent, accruing progressive β-amyloidosis with age.

To evaluate IFN-I in memory impairment, osmotic pumps were implanted in brains of mice so that an IFN antibody could be administered. In Y maze and novel object recognition assays, mice who received immunoglobulin (Ig)G control failed to show spatial novelty in the maze (P <.001) or to discriminate between novel and familiar objects (P <.001) in the object test, indicating defects to working and short-term memory. Mice that received antibody treatment behaved more similarly to wild-type controls.

The brains of the IgG control mice had reduced puncta densities of synaptophysin and postsynaptic density protein 95 (PSD95) proteins (P <.001) and a decrease in the number of c-Fos+ neurons in the dentate gyrus (P <.01).

The IFN-I antibody treatment was found to reduce signal transducer and activator of transcription one (Stat1) in the nuclei of plaque-associated microglia and neurons and to partially reduced total Iba1+ areas in the cortex (P <.01) and subiculum (P <.05). A gene expression analysis found that IFN-I blockade associated with reduced expression of neuroinflammation-associated genes (all P <.05).

IFN-I antibody treatment in mice deficient of interferon-α/β receptor (IFNAR) were found to also have reduced Iba1+ areas in cortex and subiculum (both P <.001), however, these mice did not have a similar reduction in neuroinflammation-associated genes.

In contrast to IFN-I antibody treatment in mice deficient of IFNAR, selective neural ablation of IFNAR was found to associate with a decrease in plaque accumulation in different brain regions (P <.001) and restoration of the synaptophysin+ puncta density.

A synaptic engulfment assay found that in 5XFAD mice, PSD95+ puncta engulfment was enhanced (P <.001) and mediated through IFN-I signaling in microglia.

The major limitation of this study was the irreversible nature of the reporter which could not evaluate real-time IFN-I signaling. Additional study using temporal reporters is needed.

The study authors concluded, “Overall, IFN-I signaling represents a critical module within the neuroinflammatory network of AD and prompts concerted cellular states that are detrimental to memory and cognition.” 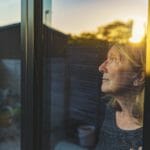 Social Isolation May Be Independent Risk Factor for Dementia