Cortical thickness patterns similar to neurobiological male phenotypes are associated with a higher likelihood of autism spectrum disorder (ASD), according to data published in JAMA Psychiatry.1

ASD is 2 to 5 times more common in males than females, although there are inadequate data to explain this relationship. Cortical thickness measurements have previously been shown to vary based on sex, but also to exhibit differences in patients with ASD. Therefore, Christine Ecker, PhD, from Goethe University in Frankfurt am Main, Germany, and colleagues sought to assess the hypothesis that ASD is related to the male phenotype brain structure.

The study included a cross-sectional sample of 98 adults aged 18 to 24 years with high-functioning autism and 98 neurotypical matched control patients. Participants were excluded if they had a history of psychosis, head trauma, brain function-related medical conditions including epilepsy, and genetic disorders tied to ASD, including tuberous sclerosis and fragile X syndrome.

Each participant underwent a standardized T1-weighted magnetic resonance imaging scan (MRI), from which cortical surface models were then developed. The investigators initially developed a model based on brain structures from MRIs of normally developing male and female control patients. The model developed from the control subjects was then applied to the MRIs of the participants with ASD.

The researchers also found that sex-based neuroanatomical variability is particularly predictive in females and that regional differences in cortical thickness were tied to a lower or higher probability of ASD.

“For example, [cortical thickness] variability in the left and right inferior temporal lobe differentiated between low or high risk in women but not in men (tmax = 3.78, cluster P = 6.29 × 10−6 for the left; tmax = 3.47, cluster P = 1.09 × 10−2 for the right),” the investigators wrote. “Therefore, while it is possible to link the probability of ASD to particular patterns of neuroanatomical variability in [cortical thickness], our findings suggest that these patterns are sex specific.”

Notably, females with ASD were found to have higher degrees of cortical abnormalities without more severe ASD symptoms, suggesting that females may have a higher threshold for symptom development.

In an accompanying editorial,2 Larry Cahill, PhD, from the University of California, Irvine, suggests that the new research provides “proof of principle” for the effect of sex on brain function, and could advance the understanding of its role in ASD. 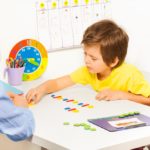