HealthDay News — Alcohol dependence has deleterious effects on frontal cortical volumes that are compounded by hepatitis C virus (HCV) infection and drug dependence, according to a study published online March 14 in JAMA Psychiatry.

The researchers found that participants with alcohol dependence had volume deficits in frontal, temporal, parietal, cingulate, and insular cortices; the deficits were prominent in fontal subregions and were not dependent on sex. In the frontal cortex and precentral and superior gyri, accelerated aging occurred; this could not be attributed to the amount of alcohol consumed, which was greater in younger- versus older-onset participants with alcoholism. Smaller frontal volumes were seen for alcohol plus cocaine and alcohol plus opiate groups versus drug-dependence-free alcoholism groups.

“We speculate that age-alcohol interactions notable in frontal cortex put older adults at heightened risk for age-associated neurocompromise even if alcohol misuse is initiated later in life,” the authors write. 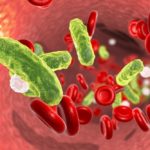 Gut Bacteria May Be Tied to Brain Dysfunction From Sepsis