HealthDay News — The first U.S. participants in a large-scale clinical trial to test the safety and efficacy of the Pfizer COVID-19 vaccine in pregnant women have received their shots, the company announced Thursday.

The goal is to enroll about 4,000 pregnant women in the worldwide trial, which the company believes will be completed by January 2023, CBS News reported.

Without vaccination, research suggests pregnant women face a higher risk for hospitalization and death from COVID-19. One study published in January revealed a COVID-19 mortality rate among pregnant women that was 13 times higher than that of other similarly aged patients, CBS News reported.

“I recommend highly that all pregnant women be immunized, from initial discovery of the pregnancy right up to term,” Bob Lahita, M.D., a professor of medicine at New York Medical College and chairman of medicine at St. Joseph University Hospital, told CBS News recently. He said there is “no evidence” that the vaccine “has any effect on the placenta, on the fetus, on the mother. Except if one gets the infection, the COVID, and you are pregnant, you run the risk of becoming very, very sick.”

Pfizer also said it plans to start trials of the vaccine in younger children in the coming months and recently began trials in teens. Research to assess the vaccine in people with weakened immune systems is also planned, CBS News reported. 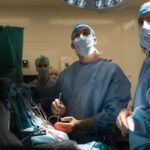