The treatment of chronic migraine with aura may not benefit from acupressure as an adjunctive therapy to sodium valproate, according to results from a study recently published in Medicine.1

Ji-Hua Xu, MM and He-yin Mi, MM, from the department of neurology at the Beijing ChaoYang Hospital in China, conducted a randomized controlled trial from February 2015 to January 2017. A total of 98 patients were randomly assigned to either into an intervention group or a control group. Patients in both groups were administered sodium valproate 800 mg/day for 8 weeks, and the intervention group was also given acupressure.

The primary outcome of the trial was the intensity of chronic migraine with aura pain, measured using a Numeric Rating Scale (NRS). Differences from baseline levels were similar after 8 weeks of treatment in both the intervention and the control groups (n=49 for each; NRS, ˗3.5 vs ˗3.3, respectively; P =.37; migraine attacks, ˗2.0 vs ˗1.9, respectively; P =.67).

In a similar fashion, other outcome measurements, such as physical functioning and body pain, were not significantly improved by the treatment. Migraine-related nausea was the only treatment-related adverse event improved by acupressure, with only 1 vs 8 study participants affected in the intervention group (P =.04).

“No significant differences were found in the pain associated with [chronic migraine with aura], as measured using the NRS, the frequency of migraine attacks, and the consumption of analgesics in the intervention group than in the control group,” concluded Dr Xu. “However, we found that [sodium valproate combined with acupressure] significantly reduced the frequency of migraine-related nausea.” 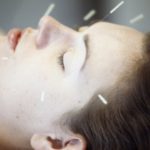 Complimentary Medicine for Migraine: Is it Being Utilized?