Diabetic retinopathy is not an independent marker of Parkinson disease (PD) among individuals aged 50 years and older, according to study findings published in Brain Communications.

A previous association between diabetic retinopathy and PD has been proposed due to the fact that both conditions may be related to an abnormal dopaminergic system. The objective of the current study aimed to evaluate and explore the prevalence and incidence of PD among patients screened for diabetic retinopathy.

The matched cohort study is based on data from several Danish registries. The first part of the study evaluated PD prevalence among patients with diabetes and diabetic retinopathy at baseline, and the second part assessed the incidence of PD in a 5-year prospective cohort.

Patients aged 50 years and older with diabetes were screened for diabetic retinopathy between 2013 and 2018, and data were extracted from the Danish Registry of Diabetic Retinopathy. The patients were randomly matched 1:5 based on sex and birth year with control individuals without diabetes from the Danish Civil Registration System.

A total of 2305 PD events occurred in the 5-year follow-up, of which 365 were in the case group and 1940 occurred among the control individuals, indicating a trend toward a reduced risk of PD in patients with diabetes (adjusted hazard ratio [HR] 0.88; 95% CI, 0.78-1.00) compared with individuals without diabetes.

Study limitations include the lack of data from the primary sector, and patients with a less severe degree of PD who have not visited the hospital are not included in the results. Also, data were unavailable regarding current smoking status and HbA1c level, and use of statins may have affected the results. 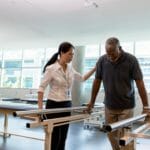