HealthDay News — Nilotinib, a drug used to treat leukemia, has shown initial signs of promise for advanced cases of Parkinson’s disease, according to a study published in the Journal of Parkinson’s Disease.

Charbel Moussa, MD, PhD, assistant professor of neurology at the Georgetown University Medical Center in Washington, D.C., and colleagues had 12 patients with either Parkinson’s disease dementia or dementia with Lewy bodies take low doses of nilotinib every day for 6 months.

One patient had to withdraw after 1 month because of heart complications, but the drug was well tolerated in the remaining patients, Dr Moussa told HealthDay. The researchers found that nilotinib was detectable in the cerebrospinal fluid (CSF) and appeared to engage the target Abl. Patients typically showed some improvement in both physical symptoms and cognitive difficulties.

“We also obtained preliminary evidence of changes in dopamine metabolism in the CSF following treatment with nilotinib. However, the participants did not constitute a homogenous cohort, and there were large baseline differences in dopamine metabolite levels, making a definitive interpretation of these results difficult,” the authors wrote. “Taken together, the data suggest that it is warranted to move forward with clinical trials to determine an appropriate therapeutic dose and evaluate nilotinib effects in larger, randomized, double-blinded, placebo-controlled trials.”

Dr Moussa is listed as an inventor on a Georgetown University intellectual property patent application to use nilotinib for the treatment of neurodegenerative diseases. 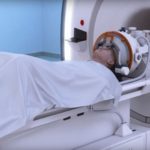