Multiple sclerosis has always been a clinical disease, and observing signs and symptoms is the most reliable way to diagnose it and monitor its progression.

MRI is the most commonly used diagnostic technology for multiple sclerosis (MS), but results often do not correlate with clinical findings or disability levels. This discrepancy is known as the “clinico-radiological paradox.”1

“MS is a clinical diagnosis supported by diagnostic technology. MRI shows us acute inflammation in white matter, which is the gold standard,” said Shiv Saidha, MD, assistant professor of neurology at Johns Hopkins University School of Medicine in Baltimore. “But our MRIs do not show the slow burn that may be taking place in gray matter. Conventional MRI is not predictive of sustained neurodegeneration.”

“Eight-five percent of patients with MS start out with relapsing-remitting disease, [in which] symptoms come and go. A significant subset will eventually go on to secondary-progressive disease, [in which] symptoms stay and get worse,” explained Timothy Vartanian, MD, PhD, director of the Judith Jaffe Multiple Sclerosis Center at Weill Cornell Medical Center in New York City. “If we had a tool that could measure and predict progression, it would be valuable for treatment and for research.”

“Several nonconventional, enhanced MRI technologies suggest that gray matter disease is strongly correlated with disability. This may prove to be true for large groups of people in a study, but it may not be sensitive enough to be meaningful for individual patients. This technology is also costly and time consuming,” Saidha said.

“In my opinion, the best chance for improved monitoring will come from one of the enhanced MRI technologies that will see gray matter damage, but we are not there yet,” Vartanian said.

Finding a biomarker that relates to MS disease activity would be useful and several possibilities are being considered. A 2014 study in Clinical Biochemistry tested oxidative stress biomarkers in patients with relapsing-remitting MS, with secondary-progressive MS, and without MS.

Oxidative stress biomarkers were elevated in patients with MS compared to normal patients but were not able to differentiate relapsing from progressive MS.3

One potentially useful biomarker for axonal damage is neurofilament. Because neurofilament breaks down during axonal degeneration, which is more likely with progressive MS, breakdown products found in serum or cerebrospinal fluid could be useful. However, research is ongoing. 4

Although electrophysiological markers have been around for a long time, a 2014 study published in the Multiple Sclerosis Journal found that multimodal evoked potentials (EPs) in 22 patients with primary-progressive MS correlated well with disability and had some predictive value for disease progression over three years. The researchers suggest further clinical trials may find a bigger role for EPs.5

“Right now there are no useful chemical biomarkers. Neurofilament may prove useful. Evoked potentials are used infrequently, but they are still the only way we have to measure conduction velocity. It is possible that multimodal EPs combined with other technologies, like optical coherence tomography, may be able to predict progression,” Vartanian said.

Optical Coherence Tomography (OCT) may offer a unique view into the progression of MS. OCT is similar to ultrasound, but it uses light instead of sound to form images of the retina. OCT measures the retinal nerve fiber layer, which thins in patients with MS even if they do not have any episodes of optic neuritis.

“I think OCT is the most promising technology we have. It has good correlation to MS disease, and it is quick, easy, and noninvasive,” Saidha said. OCT is being used in clinical trials to measure neuroprotection and repair with new therapies. However, OCT has not yet been shown to predict future progression.4

“To really be valuable, any emerging technology should help us reduce relapse and reduce conversion from relapsing-remitting disease to secondary-progressive disease. In other words, will it drive patient care? We hope for that, but we are not there yet,” Saidha said.

“On the bright side,” Vartanian said, “the drugs we are now using to treat MS have dramatically reduced the number of patients who progress to secondary-progressive disease. The one message I would like primary-care providers to get is that treatment works and should be started as early as possible.”

Chris Iliades, MD, is a full-time freelance writer based in Cape Cod, Massachusetts. 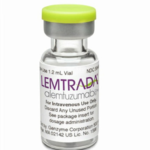 Lemtrada Wins FDA Approval for MS but Not Without Risks