The researchers sought to investigate the potential of retinal layer thinning as a predictor of treatment failure in RMS since retinal thinning, a marker of neuroaxonal damage in MS, has not yet been studied prospectively.

Both retinal layer thinning forms were measured at DMT initiation and after 12 months and 24 months (M12, M24) in 113 patients between the ages of 18 and 65 years who were diagnosed with RMS. Optical coherence tomography (OCT) was performed at these points as well.

During the observation period, 36 patients had disability worsening, 52 had a relapse, and 68 had clinical disease activity.

Patients with disability worsening displayed significantly more marked annualized retinal thinning of both forms compared with patients without disability worsening at both M12 and M24. Disease duration was weakly inversely correlated with annual loss of both GCL-IPL and pRNFL. Both baseline GCL-IPL  and pRNFL were weakly correlated with annualized loss of GCL-IPL and annualized loss of pRNFL (P <.001 for all).

The researchers recommended that OCT measuring both retinal layer thinning forms be performed within 3 months after initiating DMT and repeated annually in monitoring.

Limitations of the study include the exclusion of patients with primary or secondary progressive MS from the study. In addition, prognostic accuracy of the cut-off values might have been higher since they were from the same cohort. 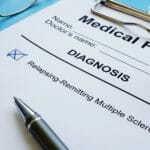