Individuals with multiple sclerosis (MS) have an increased risk of incident acute myocardial infarction (AMI) and this risk may not be fully accounted for by traditional cardiovascular risk factors, according to a study published in Neurology.

The investigators of this retrospective study sought to compare the risk of incident AMI in patients with MS vs a matched cohort without MS, controlling for traditional cardiovascular risk factors.

The study included 14,565 patients with multiple sclerosis and 72,825 matched controls using health claims data from the registries of 2 Canadian provinces. For each patient with MS, up to 5 controls were matched for region, gender, and year of birth. The primary study outcome was incidence of AMI, which was compared between cohorts using incidence rate ratios (IRRs). Associated risk of AMI in both MS and control populations was estimated using Cox proportional regression models and was adjusted for cardiovascular risk factors including diabetes, hypertension, and hyperlipidemia. The investigators also performed a meta-analysis, pooling the findings from both provinces.

Limitations to the study included the potential for imprecise coding of administrative data and the fact that the data did not account for comorbidities that were underrepresented. Individuals that died of AMI before reaching the hospital were not identified and investigators did not further examine outcomes related to incident AMI diagnosis. Some clinical characteristics were not captured in the administrative data and certain confounding health behaviors (smoking, obesity, alcohol intake, diet, and physical inactivity) could not be measured.

The risk of AMI is more than 60% greater in patients with MS, and although the MS cohort had a higher prevalence of hypertension and hyperlipidemia at baseline, increased risk of AMI persisted in this population even after controlling for traditional cardiovascular risk factors. 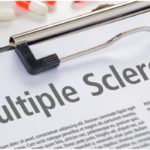