Tigran Makunts, Pharm.D., from the Skaggs School of Pharmacy and Pharmaceutical Sciences at the University of California in San Diego and the U.S. Food and Drug Administration, and colleagues used the FDA Adverse Event Reporting System database to look for statistically significant differences between nearly 40,000 people who experienced an adverse event after being treated with Botox for a variety of reasons and patients who received different treatments for the same reasons. The authors measured how absent depression was within the reports of those who received Botox and compared it to how absent depression was in the control group.

The researchers found that patients treated with Botox for six different conditions and in six injection sites reported depression 40 to 88 percent less often than those who received other treatments for the same conditions. Clinicians have observed that Botox injections in the forehead may treat depression, and clinical trials are currently testing this theory, but this study revealed that the association existed when Botox was injected in six different sites, not just the forehead.

“This finding is exciting because it supports a new treatment to affect mood and fight depression, one of the common and dangerous mental illnesses — and it’s based on a very large body of statistical data, rather than limited-scale observations,” Makunts said in a statement.

One author disclosed financial ties to Allergan, the maker of Botox, which was acquired by AbbVie in 2019. 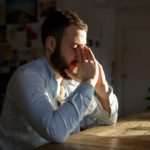