Long-acting injectable antipsychotics significantly increased time to first hospitalization in patients with early-phase schizophrenia, according to a study published in JAMA Psychiatry.

The Prevention of Relapse in Schizophrenia (PRELAPSE; ClinicalTrials.gov identifier NCT02360319) study used cluster randomization at the clinical level to more closely represent adherence in the general population of schizophrenia patients. Researchers collected data from 19 clinics that provided long-acting injectable antipsychotics treatment with long-acting aripiprazole monohydrate once monthly, and 20 clinics that provided antipsychotic medication treatment as usual. The inclusion criteria for participants (n=489; 75.3% men) included a schizophrenia diagnosis confirmed by the Structured Clinical Interview for DSM-5, Research Version (SCID-5), less than 5 years of lifetime antipsychotic use, age of 18 to 35, and ability to give consent. Patients were followed for 2 years, during which time data on hospitalizations and emergency department and crisis unit use was collected via monthly phone interviews and confirmed via hospital records or other sources.

Limitations to the study included potential selection effects caused by the cluster randomization design and the use of only 1 formulation for comparison.

“Long-acting formulations are infrequently used in early-phase treatment, and the association between their use and decreased hospitalization risk can have implications for individual treatment decisions and public health efforts,” the researchers concluded. 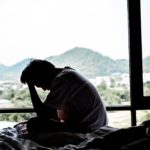 Depression, Anxiety May Be Signs That COVID-19 Is Attacking Brain