Among older people with HIV (PWH), higher plasma citrate and succinate levels are associated with neurocognitive impairment (NCI). This according to a study published in Clinical Infectious Diseases.

The evidence from this study is not sufficient to determine whether these associations are specific to HIV-associated NCI or whether these associations reflect changes to mitochondrial function, glycolysis, or other cellular pathways. The power of this study to detect potential clinically meaningful interactions was limited. The analysis was strengthened by repeated assessments using validated tests of neurocognitive function.

The investigators concluded, “Fasting plasma [tricarboxylic acid] cycle metabolites are associated with cross-sectional and longitudinal measures of neurocognitive function and gait speed in PWH in an age-dependent manner.” This supports the importance of altered bioenergetic metabolism in NCI and suggests different mechanisms among the different age groups, according to the investigators. They add that these metabolites are potential future targets for NCI therapeutics.

Disclosure: Some study authors declared affiliations with the biotech, pharmaceutical, and/or device companies. Please see the original reference for a full list of authors’ disclosures. 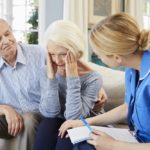