HealthDay News — For comatose survivors of out-of-hospital cardiac arrest, inhaled xenon combined with hypothermia is associated with less white matter damage than hypothermia alone, as measured by fractional anisotropy on magnetic resonance imaging (MRI), according to a study published in the Journal of the American Medical Association.

Ruut Laitio, MD, PhD, from the University of Turku in Finland, and colleagues examined the effect of inhaled xenon on ischemic white matter damage assessed with MRI in a phase 2 trial. One hundred ten comatose patients who had experienced out-of-hospital cardiac arrest were randomized to receive inhaled xenon combined with hypothermia for 24 hours or hypothermia treatment alone (55 in each group). MRI data were available for 97 patients at a median of 53 hours after cardiac arrest.

The researchers found that the mean global fractional anisotropy values were 0.433 and 0.419 in the xenon and control groups, respectively; after adjustment for age, sex, and site, the mean global fractional anisotropy value was 3.8% higher in the xenon group (P = 0.006). Seventy-five patients (68.2%) were alive at 6 months. There were no significant between-group differences noted in secondary end points (neurologic outcome assessed using the modified Rankin Scale and mortality) at 6 months.

Several authors disclosed financial ties to pharmaceutical companies, including the Neuroprotexeon Company, which intends to commercialize the use of xenon for ongoing neurologic injury. 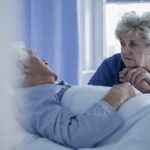 Flexible Family Visitation Policy Does Not Reduce Delirium in ICU