Investigators performed a quantitative measurement of high-performance plasma amyloid-β biomarkers with immunoprecipitation and mass spectrometry. Amyloid-β positron emission tomography (PET) imaging was used to image amyloid-β precursor protein 669-711/Aβ1-42 and Aβ1-40/Aβ1-42 ratios and to determine their predictive value for an individual brain Aβ-positive or -negative status among 2 datasets in Japan and Australia.

Each dataset included patients who were had normal cognition (n=218), had mild cognitive impairment (n=98), or had AD (n=59).

Test plasma biomarkers performed well for predicting the burden of brain Aβ. The composite biomarker demonstrated the highest areas under the receiver operating characteristic curves among individuals in both Japan and Australia (discovery, 96.7%, n = 121 and validation, 94.1%, n=111).

Investigators calculated an accuracy of the composite biomarker for predicting brain Aβ burden of 90% with the use of 11C-labelled Pittsburgh compound-B-PET as a standard of truth. Test biomarkers were also associated with Aβ-PET burden as well as Aβ1-42 levels as measured in cerebrospinal fluid.

Because this was an analysis focused on a small number of individuals with a variety of cognitive features, future validation studies with a greater number of participants may be needed to confirm the results.

The study is also limited because it did not use a comparison arm or randomized design, both of which may have improved the ability to derive knowledge regarding a benefit of using these biomarkers in clinical practice.

The investigators suggest that, “when there is diagnostic uncertainty about a clinical diagnosis of AD, Aβ-PET is considered to have a major clinical effect, providing diagnostic confidence or leading to changes in diagnosis.” 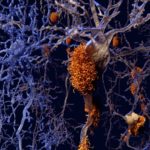 Amyloid Deposition May Be Reversed With BACE1 Inhibition