HealthDay News — Mid-adulthood hypertension is associated with increased risk of dementia among women but not men, according to a study published in Neurology.

Paola Gilsanz, ScD, from the Kaiser Permanente Division of Research in Oakland, California, and colleagues examined the correlation of early-adulthood and mid-adulthood hypertension with dementia in a cohort of 5646 members of an integrated health care delivery system. Hypertension categories, based on measurement of blood pressure, and the change in categories, assessed between two examinations (1964 to 1973 [mean age, 32.7 years; early-adulthood] and 1978 to 1985 [mean age, 44.3 years; mid-adulthood]) were used to predict the incidence of dementia from 1996 through September 2015.

“Though midlife hypertension was more common in men, it was only associated with dementia risk in women,” the authors wrote. “Sex differences in the timing of dementia risk factors have important implications for brain health and hypertension management.” 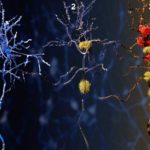