Amyotrophic lateral sclerosis (ALS) is a progressive motor neuron disease involving muscle weakness and wasting. The prevalence of ALS has been estimated at 5.2 cases per 100,000 population and affects approximately 16,500 individuals in the United States.1 ALS is usually diagnosed in patients between the ages of 40 and 70 years, although diagnosis can also occur as early as age 20 and in those aged >80 years.2 ALS is more common in men until the seventh decade, after which women and men are equally affected by the disease.2

ALS is categorized into 2 types: sporadic and familial. Sporadic ALS comprises 90% to 95% of cases without a known genetics or environmental cause.3 Potential causes of sporadic ALS include excess glutamate production, viral infections, and inflammatory processes.4  Alternatively, familial ALS has an autosomal-dominant inheritance pattern and presents similarly to sporadic ALS.2  Two genetic mutations are known to cause familial ALS:  C9orf72 gene mutation, which is located on the ninth chromosome, and superoxide dismutase type 1 (SOD1) gene mutation on the 22nd chromosome.5-7

Approximately 30% of patients with ALS present with bulbar signs and symptoms (Table 2).8-10 Dysphagia, excessive salivation, and exaggerated emotional responses are types of upper and lower motor neuron bulbar symptoms experienced by patients with ALS.4 Excess salivation and drooling are directly related to a patient’s difficulty swallowing saliva and liquids; they often experience less difficulty swallowing solids.2  Difficult articulation, hoarseness, and diminished volume are speech defects that cause communication challenges for patients with ALS and may eventually progress to the inability to speak.2,4  Patients with ALS also tend to experience pseudobulbar affect, or brief episodes of exaggerated emotional responses consisting of laughter or crying that emerge rapidly, without warning.2,12 During physical examination, bulbar symptoms present with facial weakness and atrophy, slow tongue movements, and poor soft palate and uvula rise upon phonation.

Extraocular muscle movements, bladder and bowel movements, or sensory function are not affected by ALS.4 Additionally, patients with ALS do not experience skin integrity issues; however, they may develop pressure ulcers from immobility.4

From the May 2020 Issue of Neurology Advisor 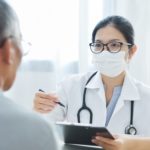