This was a case report of a pediatric patient presenting with progressive macrocephaly that was published in Neurology. The patient was given a ventriculoperitoneal shunt which successfully treated the communicating hydrocephalus and intraventricular cerebrospinal fluid (CSF) turbulence.

A girl who was 3 years of age presented at Yale University in the United States with progressive macrocephaly. The patient previously had an open myelomeningocele which was later successfully surgically repaired at birth.

The clinicians did not identify any evidence of intracranial hemorrhage or meningitis.

A physical examination indicated that the patient had a head circumference of 54 cm, which was over the 99th percentile for her age. Additionally, she had reduced motor function of her lower extremities.

The clinicians determined the patient should undergo surgery and have a ventriculoperitoneal shunt placed in order to relieve the cranial pressure. During the operation, the patient had an intraoperational intracranial pressure of 13.2 mm Hg (18 cm CSF). This was well above the expected pressure for children.

At 7 weeks after surgical intervention, an MRI scan indicated the patient had complete resolution of the intraventricular CSF turbulence as well as a reduction of ventriculomegaly. The patient’s progressive macrocephaly was arrested. However, she continued to have mild neurocognitive impairments. 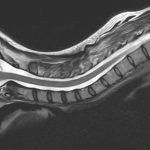 Treatment for Pediatric Acute Flaccid Myelitis Should Be Individualized