Noting that some pediatric gender clinics have reported an increase in TGD adolescents presenting for care who were AFAB versus AMAB, Jack L. Turban, M.D., from the Stanford University School of Medicine in Palo Alto, California, and colleagues calculated the AMAB:AFAB ratio for each year using the 2017 and 2019 Youth Risk Behavior Survey across 16 states that collected gender identity data. In addition, the rates of bullying victimization and suicidality were examined for TGD youth versus their cisgender peers.

A total of 91,937 and 105,437 adolescents were included in the analyses in 2017 and 2019, respectively. The researchers found that 2.4 percent of adolescents identified as TGD in 2017, with an AMAB:AFAB ratio of 1.5:1. In 2019, 1.6 percent of participants identified as TGD, with a ratio of 1.2:1 for AMAB:AFAB. Compared with their cisgender peers, TGD youth had higher rates of bullying victimization and suicidality.

“The AMAB:AFAB ratio of TGD adolescents in the United States does not appear to favor TGD AFAB adolescents, and the notion of rapid-onset gender dysphoria should not be used to restrict the provision of gender-affirming medical care for TGD adolescents,” the authors write. 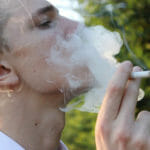 E-Cigarette Use Associated With Future Cannabis Use in Teenagers