Idiopathic hypersomnia (IH) is a chronic neurologic sleep disorder that causes excessive daytime sleepiness even though a person can get adequate, or more typically, long amounts of sleep (more than 9 to 10 hours in a 24-hour period). People with IH often struggle to wake, although they set multiple alarms, and also have difficulty rising from bed (sleep inertia). They may start the day feeling extremely groggy (sometimes referred to as sleep drunk), and can experience significantly reduced focus and concentration during waking hours (brain fog).1

People with IH often live without a correct diagnosis for a long time, blaming themselves and struggling to maintain work, studies and relationships.1 The Hypersomnia Foundation and Jazz Pharmaceuticals plc have partnered on a disease awareness campaign, “I Have IH,” to increase awareness and knowledge of IH within the health and larger sleep community. To better determine physicians’ understanding of the sleep disorder, the Hypersomnia Foundation and Jazz Pharmaceuticals conducted a survey of 305 health care providers, measuring their perceptions and knowledge of IH.

This survey was conducted online by Toluna Analytics between February 5 and February 12, 2021 among a nationally representative sample of 305 health care providers. The cohort included self-identified sleep specialists (n=4), neurologists (n=67), psychiatrists (n=82), pulmonologists (n=90), and primary care physicians (n=62). About 49% were board certified in sleep medicine. There were 148 sleep doctors and 157 non-sleep doctors among the health care providers who responded to the survey.2

We spoke with Richard Bogan, MD, FCCP, FAASM, associate clinical professor at the University of South Carolina School of Medicine and Chairman and Chief Medical Officer of SleepMed Inc., a sleep diagnostic firm to find out more about IH.

Can you speak to the multidirectional relationship between hypersomnolence, mood disorders, and hypersomnia disorders?

In other words, it’s really hard for them to wake up and then when they wake up, they’re foggy and it takes a long time for their brain to warm up, even though they’ve had an adequate opportunity to sleep and, in some cases, long sleep. They may sleep, 10, 11, or 12 hours and they wake up and they are still foggy and sleepy. Of course, sleepy people have problems with executive function and thinking, memory, and mood, so they can have more irritability and low motivation.

Many of them get mistaken for having mood disturbance. Of course, some of them go on to develop mood disturbance because they’re sleepy and tired and they can’t get things done, so they have problems with their social interaction and workplace performance. Consequently, many of them develop comorbid mood disorders.

I see a lot of my patients who have psychiatrists or behaviorists, psychologists who work with them in terms of helping them with their coping skills and mood, but I think the answer is that we have a subgroup of individuals who are sleepy no matter how much sleep they get, and one of the common ways that they present is many people think that they’re depressed when they’re not really depressed.

It seems like there can be sometimes a significant diagnostic delay for some hypersomnia disorders. Is there any way that clinicians can better screen patients for these disorders?

DR BOGAN: One factor in understanding the disorder is that it tends to involve more women and it tends to be more young women when it first starts. In many of these individuals, particularly in narcolepsy but also in idiopathic hypersomnia, it starts typically as a young adult. That can occur at any time obviously, but oftentimes what will happen is that the individuals are sleepy first and then develop mood disturbance, so they may be anxious or they may be depressed, some of which may be situationally related to their poor performance because they’re sleepy. So, I think understanding the time course is key.

But more importantly, I think you have to recognize that the individuals are sleepy. They’re not just tired. They may not even be depressed. They’re just tired. If they are depressed, I think it’s important to recognize that they’re sleepy and that’s why I say if you have a person who’s having problems with executive function, thinking, memory, focus, attention or mood disturbance, depression, anxiety, cognitive decline, trouble with memory, etc., then determine whether they’re sleepy or not. If they’re sleepy, that may explain their symptoms and we can usually define what is causing their sleepiness. If we help the sleepiness then that will help a lot of other symptoms.

I really recommend that you qualify if the individual is sleepy or not and quantify how sleepy are they. One of the ways to do that is with a patient-reported outcome measure. We used the Epworth score. There are other ones, but the Epworth score is a simple questionnaire, 8 questions, and the majority of those patients are going to score abnormal. They’re going to be measurably sleepy compared with the general population, and there’s that “a-ha” moment.

I have a patient who was depressed and anxious and had sleep disturbance but their sleep score is high. They score 16, 17, 18 out of 24, whereas I’m normal with a 6 on my Epworth score. So immediately I know that if it’s above 10, which indicates that something is going on, this individual is sleepy and I need to dig into it and find out why.

What makes it so challenging to diagnose IH?

DR BOGAN: I think it’s because the time of onset tends to be in younger adults, and because the sleep disorder also tends to be in more women than men. These individuals can still function because the brain is awake in the day and they sleep at night, but they have terrible sleep inertia and then they’re fighting sleep during the day. They either may spontaneously doze off or they may be able to do things, but they’re sleepy. Most of the individuals probably don’t recognize that they are as severe as they are because they can get by. But, something will eventually happen that tells them, I’m sleepier than the rest of the world. Something is going on.

Many times, they see their family physicians and get worked up for low thyroid or get treated for mood disturbance because they’re considered depressed. They look normal. They don’t look abnormal. They don’t look sleepy when they’re in the office so as a result, we tend to under recognize them and unless you ask the questions in terms of how sleepy are you may not reach the correct diagnosis. Questions such as: Do you spontaneously doze off when you’re inactive? Are you fighting sleep? Do you nap every day? When you nap are they long naps? Then when you wake up from a nap, do you feel refreshed? These are things that these individuals have. They’re not refreshed. They have sleep inertia. It takes a long time for the brain to warm up and sometimes they’re considered lazy because they can’t wake up in the morning. They set two or three alarms and they sleep through the alarms and they miss work. These oftentimes are blamed on personality characteristics, or being lazy, etc., and then they’re treated for depression and it’s really idiopathic hypersomnia.

Are some of the criteria that you mentioned in IH also seen in other sleep/wake disorders? For example, obstructive sleep apnea.

DR BOGAN: I don’t think they’re similar because one, it’s unusual to have sleep apnea in a premenopausal women, but you can have it. Do they snore?  No, they don’t snore, but yet, they’re sleepy. A lot of people with sleep apnea don’t have sleep inertia. In other words, people with IH may wake up and they’ll still be tired and not necessarily refreshed, and then during the day they tend to be sleepy. These folks have a hard time waking up in the morning, whereas, for someone with sleep apnea, the alarm goes off, they wake up, and they get going. They’re like, “Wow, I’m still tired,” but they can wake up. They don’t have this prolonged sleep inertia.

Certainly, other sleep disorders run into differential diagnosis, so you obviously want to ask about snoring. If a person is obese, they may be at more risk, but premenopausal women are somewhat protected against sleep apnea.

Insufficient sleep is another, but these individuals will tell you that as a rule, unless they’re unusually stressed or in pain or whatever, they can get right off to sleep and sleep for long hours and are still not rested. That’s the tipoff.

To find out more about idiopathic hypersomnia and related disorders, go to https://www.hypersomniafoundation.org. 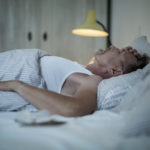 Review: Hypnotics for the Treatment of Obstructive Sleep Apnea Endotypes