Obstructive sleep apnea (OSA) is an independent predictor for diabetic retinopathy (DR) in patients with type 2 diabetes (T2D). The findings from a 4-year longitudinal study were published in the American Journal of Respiratory and Critical Care Medicine.

Quratul A. Altaf, MD, from the Centre of Endocrinology, Diabetes, and Metabolism at the University of Birmingham, United Kingdom, and colleagues sought to determine the relationship between OSA and DR in patients with T2D, the first prospective study to do so. The study found that OSA was independently associated with maculopathy and sight-threatening diabetic retinopathy (STDR) in patients with T2D.

More than 200 adult patients (n=230; 57.0% men; 54.8% white Europeans; 45.2% South Asians) with T2D from 2 outpatient diabetes clinics in the United Kingdom were assessed with an overnight home-based multichannel device. OSA was defined by the American Academy of Sleep Medicine’s guidelines (≥4% oxygen desaturation and ≥30% reduction in nasal air flow) and categorized as mild, moderate, or severe based on the apnea hypopnea index (≥5 to <15 events/hour, 15 to <30 events/hour, and ≥30 events/hour, respectively). Patients were excluded if they had been diagnosed with respiratory disease, end-stage renal disease, or nondiabetic retinopathy.

Patients with moderate to severe OSA were offered continuous positive airway pressure (CPAP) therapy, the data from which were recorded for the study. Patients who used CPAP >4 hours/night on 70% of days were considered compliant.

DR/STDR was assessed with 2×45 degrees digital retinal images as part of the annual screening program for patients with T2DM. STDR was diagnosed if patients had pre-proliferative or proliferative DR, maculopathy, or photocoagulation.

Other observations include that white European patients, who tended to be older and more obese, with higher systolic blood pressure, had elevated rates of OSA (46.8%) compared with South Asian patients (35.8%). Patients who were compliant with CPAP therapy were significantly less likely to develop pre-proliferative and proliferative DR (P <.001).

“Our observational data also suggest the CPAP treatment might have favorable impact on the progression of DR; this finding will need to be examined in randomized controlled trials,” said Dr Tahrani. “The retina might be particularly susceptible to the effects of OSA in patients with T2D due to the nocturnal increase in oxygen demands.”

The researchers received funding from the National Institute for Health Research UK. 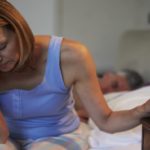