In patients with hemiparesis resulting from ischemic stroke, the use of cerebellar magnetic stimulation together with physical therapy may help improve gait and balance functions by the promotion of cerebellocortical plasticity. Results of therandomized, double-blind, sham-controlled, phase 2a study were published in JAMA Neurology.

The investigators evaluated the safety and efficacy of a 3-week treatment of cerebellar-intermittent θ-burst stimulation (iTBS)  combined with physiotherapy in stimulating gait and balance recovery among individuals who had experienced a stroke. All patients were randomly assigned to treatment with cerebellar-iTBS or sham iTBS, which was applied to the affected side of the body immediately before physiotherapy and every day for 3 weeks.

The primary study outcome was the between-group difference in change from baseline (T0) in the Berg Balance Scale score, which assessed gait and balance functions after 3 weeks of treatment (T1). Secondary end points included changes from T0 in total scores on the Fugi-Meyer Assessment and the Barthel Index; change from T0 in locomotion, as evaluated by gait analysis; and change from T0 in cortical activity, as recorded with transcranial magnetic stimulation electroencephalogram at T1. All participants were screened and enrolled between March 2013 and June 2017. Intention-to-treat analysis was conducted.

A total of 34 patients completed the study. Overall, 38.2% (13 of 34) of the patients were women; the mean participant age was 64±11.3 years. Patients treated with cerebellar-iTBS as opposed to sham iTBS demonstrated an improvement in gait and balance functions, as shown by a significant increase in Berg Balance Scale score from 34.5 at T0 to 43.4 at T1 to 47.5 after 3 weeks from the end of treatment (T2; P <.001).

Patients who were treated with cerebellar-iTBS vs sham iTBS demonstrated a significant reduction in step width at the instrumented gait analysis (mean, T0: 16.8 cm; T1: 14.3 cm; P <.05) and an increase in neural activity over the posterior parietal cortex.

The investigators concluded that cerebellar magnetic stimulation used in combination with physiotherapy may be an effective, noninvasive, low-cost strategy to promote gait and balance recovery among patients who have experienced a hemiparetic stroke. 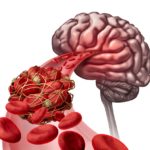