The last decade has seen a significant shift in the treatment of acute stroke. The accumulation of evidence supporting mechanical thrombectomy in acute stroke amassed since 2010 even warranted a focused update in the American Heart Association/American Stroke Association (AHA/ASA) guidelines in 2015 and most recently in 2018 dedicated to endovascular therapy.1 Although several studies have established the use of endovascular therapy with stent retrievers for selected acute stroke as standard of care, best practices still remain unclear, particularly regarding the best sedation strategy.

General anesthesia and conscious sedation have been the most commonly used sedation strategies. Prior to 2017, evidence was limited to retrospective cohorts with mixed results. Post hoc analysis of 216 patients enrolled in the MR CLEAN study and 434 patients in the IMS III trial suggested general anesthesia roughly doubled the probability of poor neurologic outcome.2,3

An analysis of a New York registry with 1174 patients who underwent thrombectomy showed a correlation between general anesthesia and death.4 Several other studies that only compared embolectomies done with and without general anesthesia generally reported results favoring conscious sedation.5–9 However, studies that looked at a more nuanced picture of peri-procedural physiology suggested that the main driver in the difference had more to do with hypotension.10,11 A retrospective study of 250 patients concluded that a change of even 10% in mean arterial pressure almost quadrupled the risk for poor outcomes.12

With this limited evidence, American Heart Association (AHA)/American Stroke Association (ASA) guidelines gave a Class IIb recommendation to favor conscious sedation over general anesthesia.1 The Society for Neuroscience in Anesthesioogy and Critical Care (SNACC) published a 2014 guideline for peri-procedural sedation in acute thrombectomy recommending a systolic blood pressure goal of greater than 140 mmHg with special attention given to avoid drops in blood pressure during induction.13

The first randomized controlled trial examining the subject was published in 2017. The SIESTA trial done in Germany examined 150 patients with acute anterior circulation stroke and did not find a benefit using conscious sedation over general anesthesia in neurologic outcome at 24 hours or 3 months with a protocol paying close attention to peri-procedural blood pressure management.14 A secondary outcome for neurologic function dichotomizing the modified Rankin Scale to good (0 to 2) or bad (3 to 6) did show a significant difference, favoring general anesthesia. The AnStroke trial published soon after found similar results in a single center in Sweden with 90 patients, again finding no difference in 3-month neurologic outcome and no differences in peri-procedural blood pressure.

The GOLIATH trial, the results of which were published recently in JAMA Neurology by Simonsen, et al,15 examined 128 patients with acute stroke. The design of this trial is similar to previously published trials (single center, with patients with acute stroke randomly assigned to general anesthesia or conscious sedation, and anesthesia protocol with strict blood pressure goals), but the results suggested that patients treated with general anesthesia were more likely to have excellent reperfusion and better functional outcomes at 90 days. The implication is that general anesthesia facilitates faster reperfusion, which may impact overall outcome.

Despite numerous nonrandomized studies suggesting a benefit with conscious sedation, randomized data in 3 separate single-center studies suggest no difference and a possible benefit. The investigators provide some explanation. Aside from the obvious risk of bias with retrospective cohorts (sicker patients who were comatose on presentation likely required general anesthesia), these more recent randomized trials also had the benefit of experienced anesthesia support with guideline-driven blood pressure goals, a detail that was left to wild-type in the post hoc analyses of MR CLEAN and IMS and demonstrated to be important in retrospective reviews that did pay attention. Explored less deeply is the notion that anesthetics may provide some neuroprotection. Propofol is known to reduce metabolic demand, which could conceivably be of benefit in penumbral tissue at risk for ischemia.16

Peri-stroke flow dynamics are complex and are likely not captured in any granular detail from these 3 relatively small trials. It is possible that factors such as collateral flow, ventilation, and metabolic demand play a role at the individual level in who benefits or is harmed by different sedation strategies. In a practical sense, general anesthesia in uncooperative patients can be considered safe as long as cerebral perfusion is protected during induction. Conscious sedation remains a viable alternative in cooperative patients without any concern for airway protection. Until then, we await more insight from multicenter trials or a pooled meta-analysis of previously published randomized data. 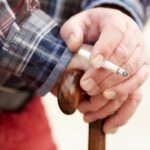