In the total cohort of 989 patients in which baseline images of NCCT scans were available, 21.4% experienced hematoma expansion (n=186/869) and 37.9% experienced an unfavorable outcome (n=361/952). According to the findings, NCCT markers were considered significant independent predictors of ICH expansion (P <.01).

Hematoma density and shape, as well as intrahematoma hypodensity presence, demonstrated higher prediction sensitivity for both ICH expansion and unfavorable outcome. A blend sign, despite its correlation with increased hematoma expansion risk, predicted a good outcome.

Although intensive treatment for BP reduction correlated with reduced ICH expansion risk in hemorrhages with irregular shape, the investigators failed to find an interactive effect between the NCCT expansion predictors and intensive BP reduction (P for interaction >.10).

Medical complications and infections, which are associated with poor post-ICH outcomes, were not fully accounted for in the final analysis. The investigators were also unable to account for anticoagulant use, which is a “strong predictor of hematoma growth and poor outcome.”

According to the researchers, these results may help determine appropriate risk stratification in patients with ICH and “identify patients with the highest likelihood to benefit from anti-expansion treatment.” 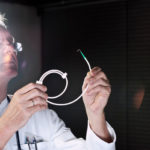 No Benefit of Contact Aspiration Over Stent Retriever in Ischemic Stroke