With respect to the messenger, credibility and objectivity are critical, but just as important is the recognition, reputation, and influence of the messenger. I believe a real opportunity exists to utilize coaches, icons, and peers to deliver and/or reinforce the message. Traditionally, amateur and professional athletes have heard retired and active professional players speak of their own toughness and how they valued play so much they would need to be “carried off the field” rather than volunteer information about a suspected injury and remove themselves from competition. More recently, the pendulum has swung opposite, with some athletes retiring early or declining to compete for fear of CTE. Right or wrong, informed or ignorant, these voices are heard and aspiring amateurs mimic the messages.

Likewise, coaches have significant influence over the actions, activities, and behaviors of the athletes they coach. Too often, volunteer youth league coaches (and many high school coaches in underserved communities where assistants are frequently volunteers) tend to coach the way they were coached. They lack continuing education and have little knowledge of current and evolved approaches that stress safety as a key aspect of performance. As intuitive as it would seem that keeping your best players healthy and on the field should be a priority, many coaches default to the “old-school” traditions of proving toughness in how they conduct their practices and determine starting player selection. There are explicit as well as subtle, unstated messages being sent to the players who are being coached in this manner, and Players will respond in order to get and stay on the field. Make no mistake; player behavior is directly influenced by the insight (or lack thereof) of the coaches for whom they play.

Proper, effective knowledge transfer to coaches on safe participation and best practices regarding brain health and safety represents a major opportunity for those of us interested in making football safer. And like the players they coach, amateur, volunteer, and other football coaches will mimic the behaviors of the iconic coaches they respect. Emphasizing the optimistic and beneficial effects on performance when behaving in ways that protect and optimize neurological function is a strategy that can make football safer, and one that can be employed now.

Vernon B. Williams, MD, is director of the Kerlan-Jobe Center for Sports Neurology and Pain Medicine and chair of the American Academy of Neurology’s Sports Neurology Section. Additionally, he serves as a physician consultant for several professional, college, high school, and club-level athletic teams including the Los Angeles Kings, Los Angeles Lakers, Los Angeles Dodgers, Los Angeles Rams, Anaheim Ducks, and Anaheim Angels, and is a California State Athletic Commissioner. 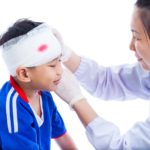