The device, developed by a research team in China, could potentially offer long-term monitoring of thrombosis and restenosis and improve quality of care for patients after vascular reconstruction surgery.

Currently, to prevent thrombosis – which can occur within 72 hours – and restenosis complications after vascular reconstruction surgery – a physical exam of the capillary fill and skin color should be done every hour. However, patients who are hospitalized are only sporadically assessed, or sometimes not even assessed after discharge. The objective of the current study was to monitor how a wearable Doppler device could enhance quality of care following reconstruction surgery.

Researchers used a continuous wave Doppler in the wearable device that featured a transducer which continuously transmitted an ultrasound beam, while an adjacent transducer received blood-based scattered echoes. The skin-conforming device provided straightforward signal processing and functionality compared with pulse-wave Doppler devices, according to the researchers.

In the design, they used angled transducer array to develop opaque ultrasound beams, which were used to determine the relative motion between the ultrasound beam and scatterers. Subsequently, the researchers determined the Doppler angle with the use of a dual-beam ultrasound Doppler method. The pulse and frequency responses of the transducer were determined, and they noted a stable central frequency of approximately 5 MHz.

Tests with the device were performed on a standard ultrasound phantom, which was used to simulate tissue and blood fluid in humans. The device continuously showed changes in vascular resistance, demonstrating its value in detecting certain blood flow characteristics. Ultimately, the researchers noted that several experimental studies on both ultrasound phantoms and human participants showed the wearable device provided accurate measurements of the flow velocity, demonstrating its potential as a noninvasive measurement of flow velocity in human arteries.

Based on their experiments, the researchers added that the device avoided complex imaging common with the clinical ultrasound machine and “requires no experienced operator, applies much smaller pressure, and thus helps with long-term monitoring” following vascular reconstruction surgery. 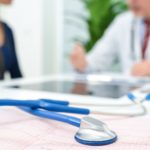 Sacubitril-Valsartan Does Not Decrease Risk for Death, Heart Failure After MI